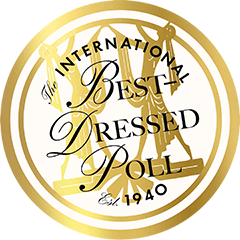 The demise of dressing up has once again (to paraphrase Mark Twain) been greatly exaggerated. All during the pandemic, Zeitgeist prophets—sheltering in place in their sweats and Zooming pants-less from their home offices—declared that the end was nigh, perhaps hoping their words might hasten the arrival of an era that was not only post-pandemic but post-fashion.

Even so, the latest edition of the International Best-Dressed List reflects some cultural shifts wrought by the coronavirus. We celebrate several talented individuals, for example, who engaged our attention while we were cocooned indoors, chain-watching streaming series.

Squid Game’s Jung Ho-yeon, The Queen’s Gambit’s Anya Taylor-Joy, and Euphoria’s Zendaya, all rising stars in their 20s, together make their debuts on the List. Similarly, six-time Grammy winner Luis Miguel, a List initiate at 52, was the subject of the eponymous Spanish-language Netflix series that ran for three seasons and catapulted the singer back onto pop charts. For the first time in the I.B.D.L.’s 82-year history, a father and daughter bow simultaneously, as Miguel’s eldest child, 32-year-old Michelle Salas, an influencer with 1.8 million followers, has been elected as a Fashion Professional.

List newcomer Chris Rock’s recent demonstration of grace under pressure on live TV recalls I.B.D.L. Hall of Famer Carolina Herrera’s observation, made a few years ago, that “best-dressed is also about how you move, think, and live in your clothes, ideally with a sense of humor.”

With a scope reaching well beyond the entertainment industry, the present List recognizes figures from the worlds of philanthropy (the Ford Foundation’s dapper Darren Walker, who in 2020–21 earmarked $330 million for racial-justice initiatives); society (Ivy Getty, whose grandmother Ann Getty and aunt Vanessa Getty preceded her on the List); sports (Emma Raducanu, one person whose sequin sheaths and Tiffany & Co. diamonds make sense with tennis shoes); literature (best-selling poet Amanda Gorman, selected for the second consecutive year); the fine arts (consummate dandy Iké Udé, whose “Nollywood Portraits” exhibition is on view until February 2023 at the Smithsonian’s National Museum of African Art).

The I.B.D.L. has officially become gender neutral, with the previously discrete “Women” and “Men” categories now merged. Additionally, the List names its first trans person, Brazilian actress and model Valentina Sampaio, who enters as a Fashion Professional. Designer, performer, and memoirist Isaac Mizrahi likewise premieres on the List as a Professional—even though last month during his sold-out two-week run at Manhattan’s Café Carlyle he proclaimed that he “never thinks anyone deserves an award of any kind.”

Tony-winning producer Jordan Roth, whose sartorial self-expression has evolved into a theatrical genre of its own, arrives on the List as an Original, as does the Studio Museum in Harlem’s vibrant Thelma Golden.

In recognition of her protean, outré elegance, the I.B.D.L. has elevated Lady Gaga to the Hall of Fame, a supreme accolade instituted by List founder Eleanor Lambert in 1958. At the Oscars, Gaga showed that, even when relatively restrained, her looks are laden with iconography: her re-purposed Ralph Lauren liquid-lamé tuxedo jumpsuit alluded to the androgynous showbiz costumes of both her co-presenter, fellow I.B.D.L. Hall of Famer Liza Minnelli, and the Cabaret star’s mother, Judy Garland.

Not long after, at the Grammys, Gaga’s intrinsic elegance was once again on display when, in a be-plumed turquoise capelet designed by her sister, Gaga kindly stooped to adjust the train of SZA’s dress when the R&B star hobbled up the staircase on crutches to accept her Best Pop Duo trophy.

Joining Gaga in the I.B.D.L.’s style pantheon is Norma Kamali, whose induction—after appearing on the List five times, beginning, extraordinarily, in 1978—is as deserved as it is overdue. The inimitable Kamali has throughout her half-century career embodied the philosophy of fashion savant Simon Doonan, an honoree this year in the Couples category (alongside his husband, Jonathan Adler), that “dressing up”—especially at the present distressing moment—“is life-affirming.”

Amy Fine Collins is an Editor at Large for AIR MAIL.She is the author of The International Best-Dressed List: The Official Story